The Sheward Partnership team tends to cover some ground when it comes to travel. From Icelandic hiking to African safaris, you never know what you’re going to get when you ask someone where they went on vacation. No matter where in the world the TSP team travels, there’s always one thing in common: architecture. Seeing the differences in architectural styles and design around the world is just another vacation perk for this group. As the summer winds down, we want to share with you some of the wonders that our team visited this year. Today we bring you to Paris, France, Santorini & Crete, Greece, and Belize through the eyes of architectural designers:

The spotlight in the architectural world was on Paris this April, with the fire that heavily damaged the Notre-Dame de Paris. While many relics were saved, the cathedral’s roof sustained severe damage and the iconic spire was completely destroyed. I visited Paris in late February this year, a matter of weeks before the destruction. While the Notre-Dame de Paris occupies the southeastern portion of the Île de la Cité (a small natural island in the middle of the Seine), less than half of a mile to the west lies a lesser-celebrated architectural gem, the royal chapel Sainte-Chapelle. The structure was a private chapel in the residence of the Kings of France, built by Louis IX to house his collection of relics of Christ, in addition to serving as a place of worship. Construction began in 1242, over 80 years after Notre-Dame, but was completed in a mere 6 years, opening in 1248. Notre-Dame wouldn’t be substantially complete for another 12 years. 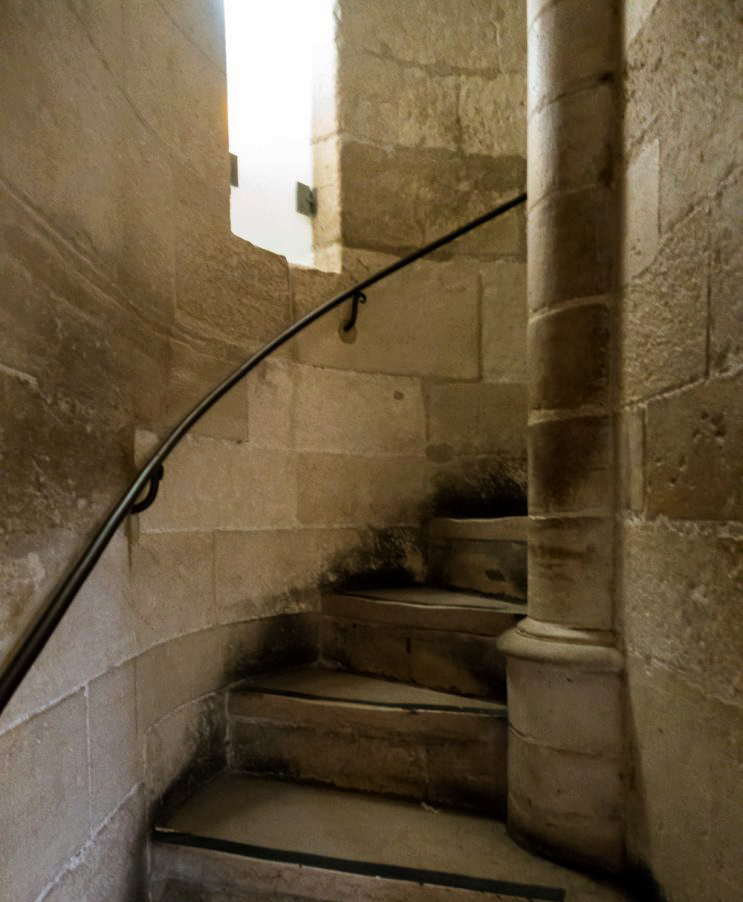 The modern visitor enters the structure beneath the chapel, in a (relatively) dimly-lit space. A narrow stone spiral stair leads to the main floor of the chapel. But the experience to this point in the journey is no indication of what is about to come. With each step, the dim glow quickly grows to the brightest light. 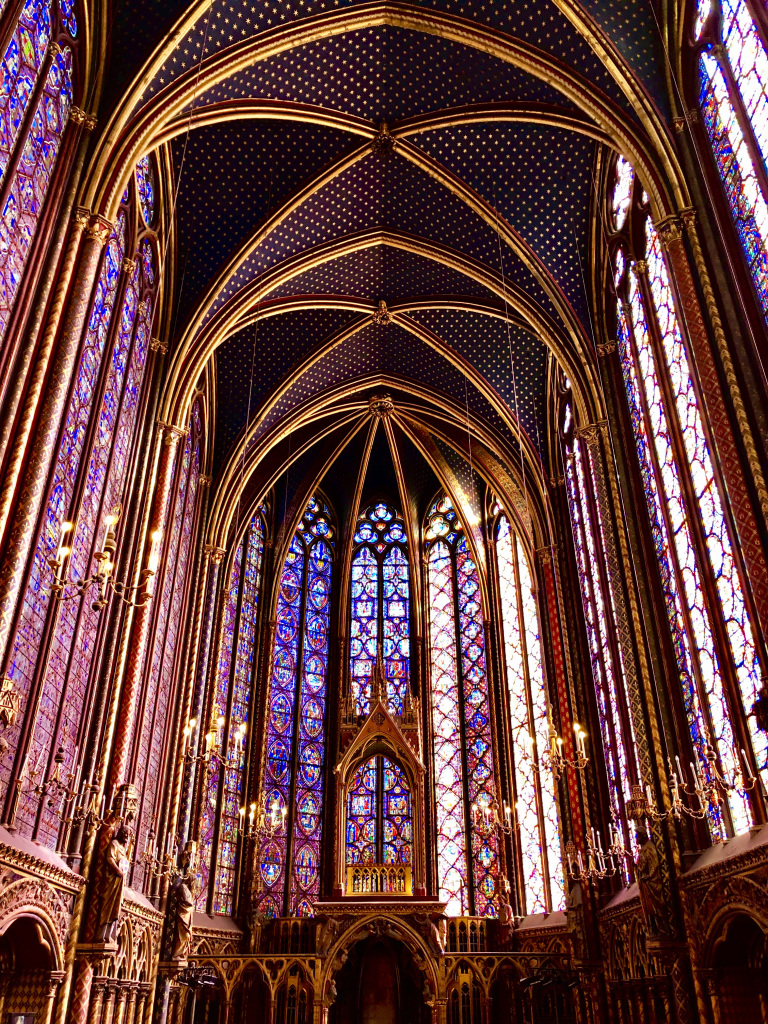 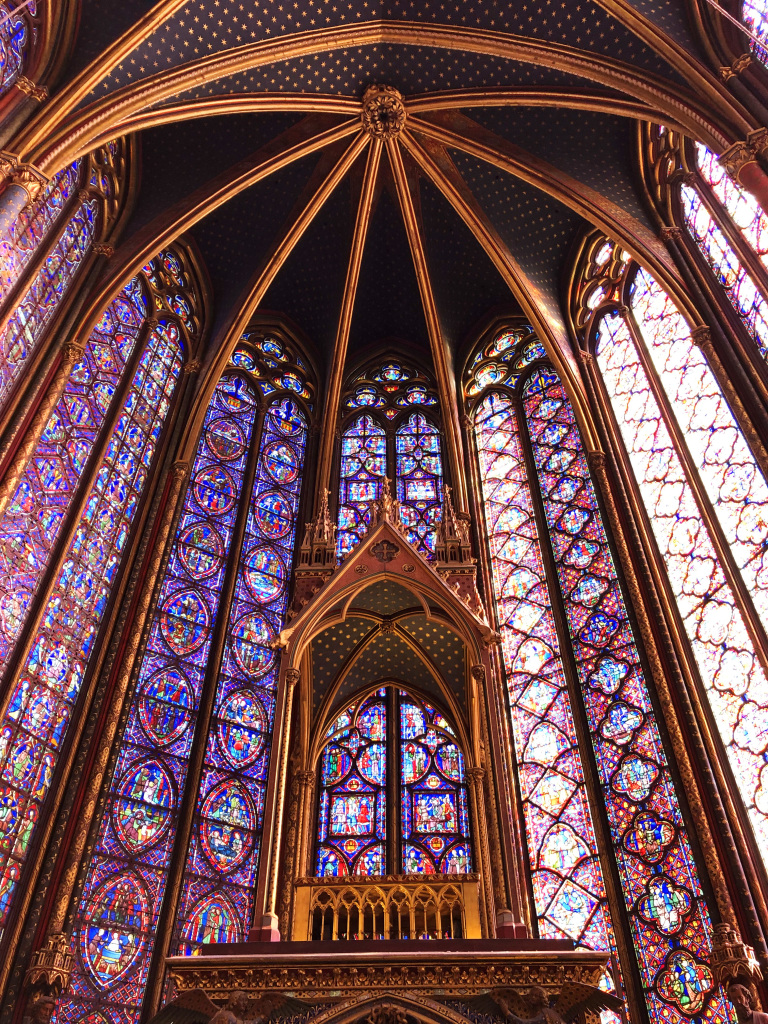 The stained glass windows dominate the façade, reducing the stone structure to the thinnest and seemingly most impossibly delicate framework. In total, the 15 stained glass windows depict 1,134 scenes and encompass a surface area of 6,652 square feet, the rough equivalent of two IMAX screens. It is truly a transcendent experience, and one which we must remember and appreciate as restoration efforts begin on the Notre-Dame and continue to celebrate for centuries to come. 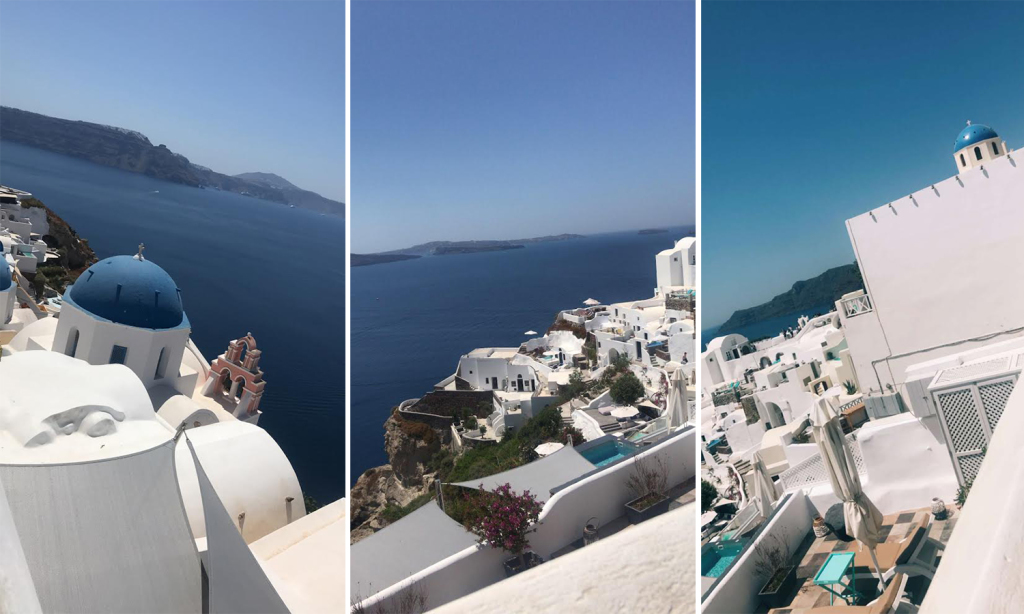 Nothing is more breathtaking than the white-painted villages and blue domes that sprinkle across the island of Santorini. The Cycladic architecture in combination with the striking landscape distinguishes Santorini from the mainland and many of the other Greek islands. Built from the same volcanic material that shaped the island itself, the traditional homes are designed to be structurally sound to sit along the high cliffs and strong enough to resist collapse from landslides during the winter months. What I found to be most stunning was how perfectly the blue of the domes captured the color of the sky and Aegean sea as well as the fluidity of the typical Cycladic-style with Venetian arches and monasteries throughout the island’s towns. 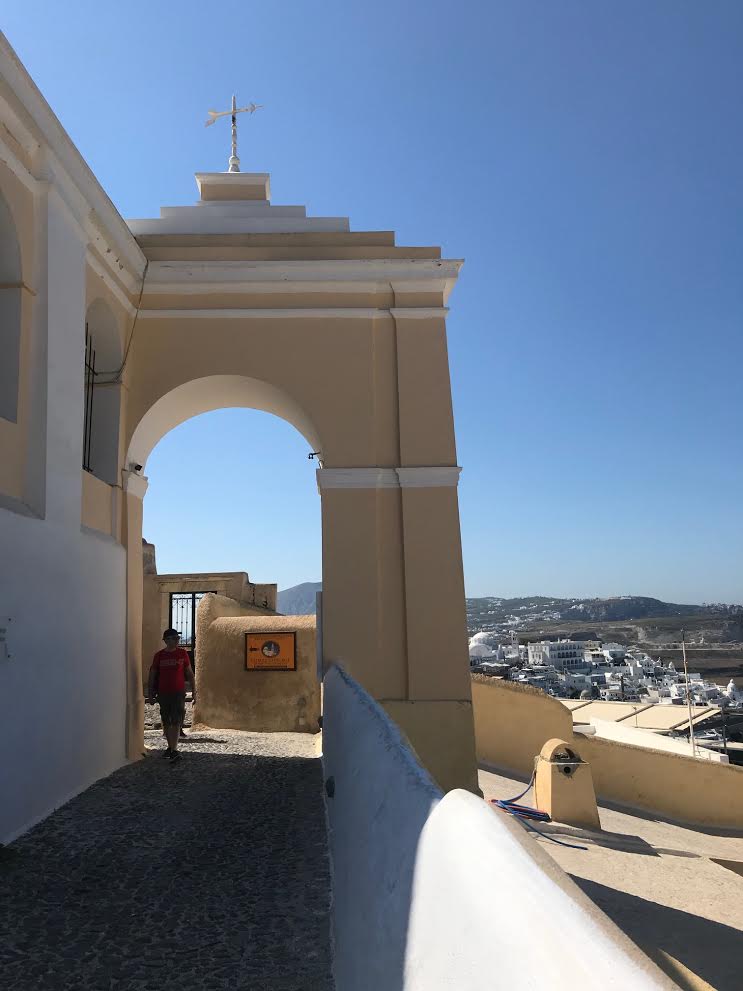 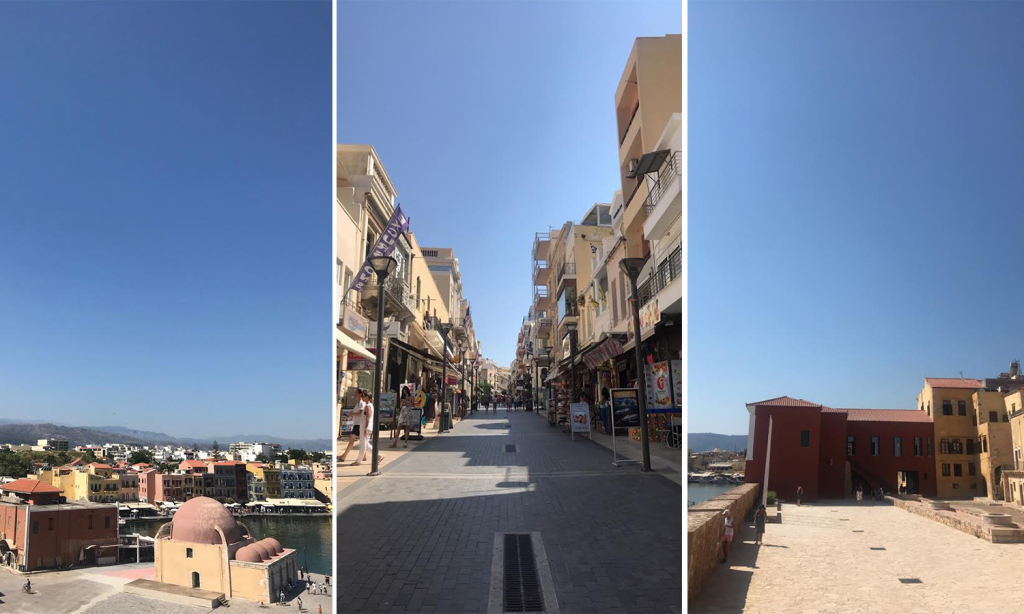 Crete’s architecture can be characterized primarily as Venetian, but was developed over a long history of different nations occupying Greece’s largest island. Crete embraces this history; and whether it’s eating dinner in an old Roman bathhouse or walking past a domed mosque along the Aegean Sea from the Ottoman era, the variety of history is evident through its architecture. Outside of the capital city, Heraklion, I visited the Palace of Knossos, a critical location of Cretan power during the Mycenaean dynasty and also the home of king Minos (and the mythical creature, Minotaur). The palace, supported by its signature “upside-down” columns, has a labyrinth of a floor plan and sewer system extremely progressive for its time. The tour of this site gave me a glimpse into one of the most advanced buildings of the second millennium. 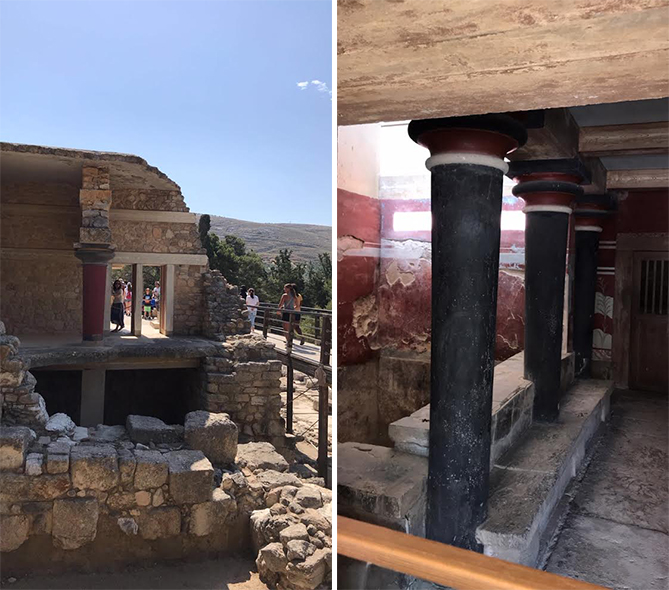 The name “Xunantunich” (shoo-NAHN-too-nich) is derived from the Yucatec Maya language and means “Stone Woman” but was referred to as the “Clay Mountain” by Mayans due to its painted façade in white, black, and red. This site began as a small village and rose and declined between AD 700-1000, consisting of limestone structures.

All visitors wishing to enter the City would first need to be received before entering the main Plaza. 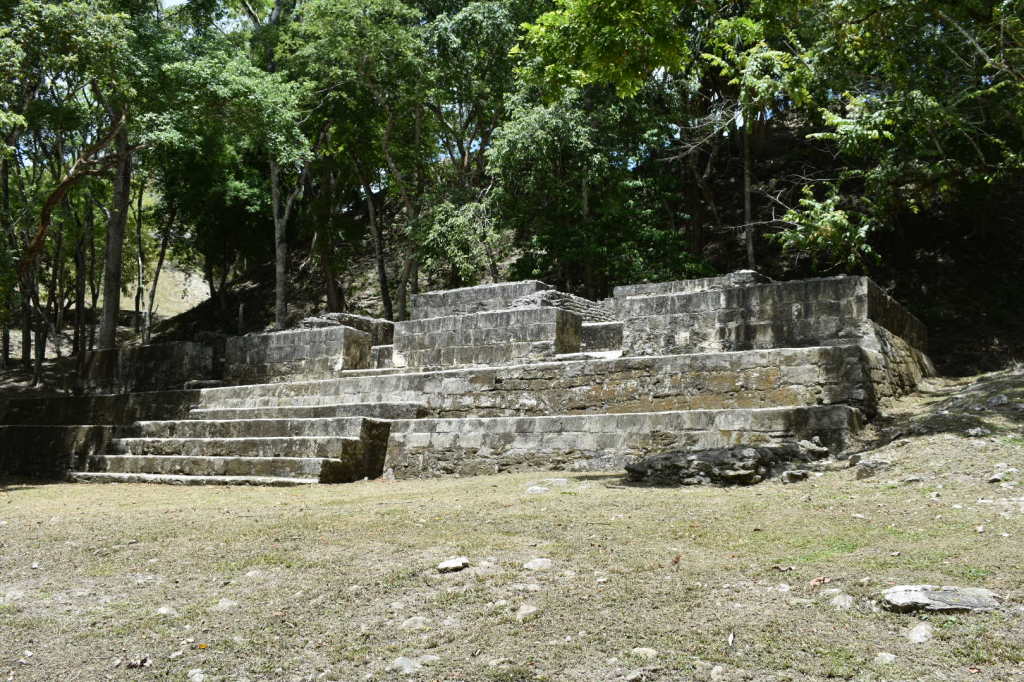 Excavation of Xunantunich is ongoing, with a tomb recently found along with two stelas. However two of the most recognized structures on the site include the elite family’s residence and the Castillo, which rises 130 feet above the limestone plaza below.

The entrance to the elite family’s sleeping quarters consists of nine openings, representing the 9 levels of the Underworld. 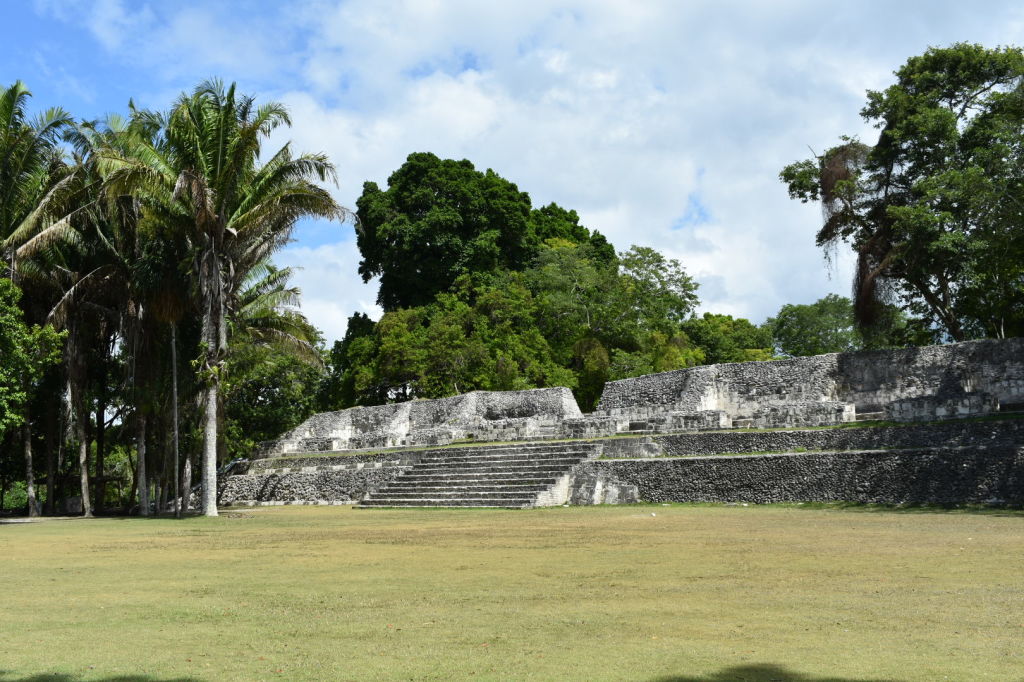 The Underworld was connected to the living realm by the roots from the Tree of Life (represented by stalactites found in caves- believed to be the entrance to the Underworld), while the Heavens represented the branches in 13 levels, represented in the Castillo by the 13 openings. The epicenter of the site consists of four architectural groups, including the Castillo. 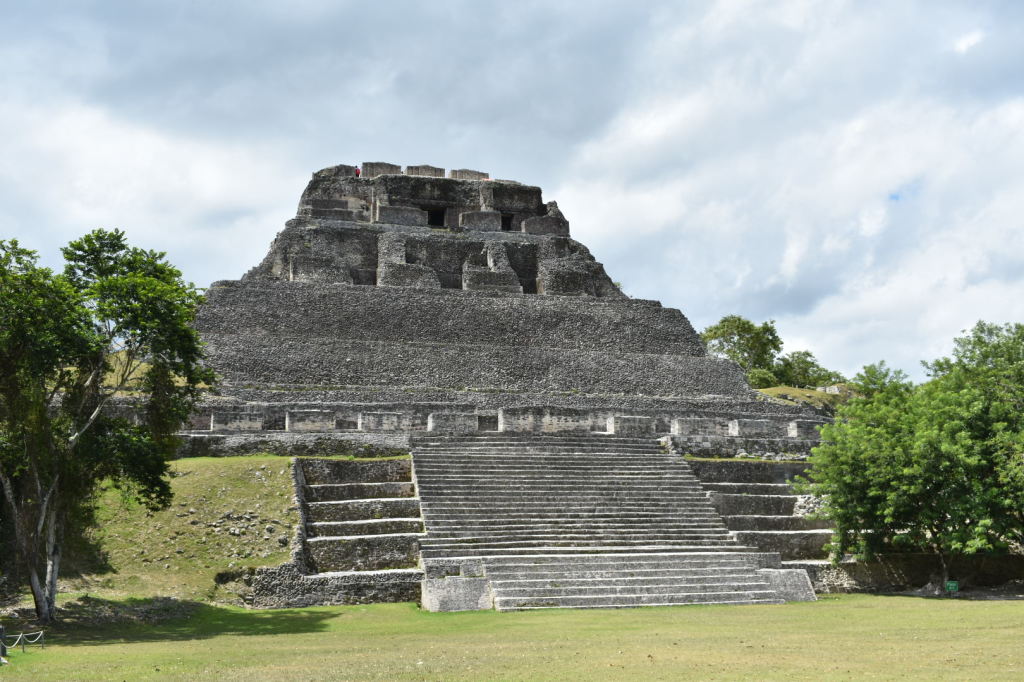 The East and West facades of the Castillo have large friezes with carvings that represent astronomical symbols, the sun god, moon, and Venus. The ancient Mayans were gifted astrologers, and trees were not present during the period the site was inhabited (by upwards of 25,000 Mayans), to afford clear views of the sky however have grown in the city as time has gone by. 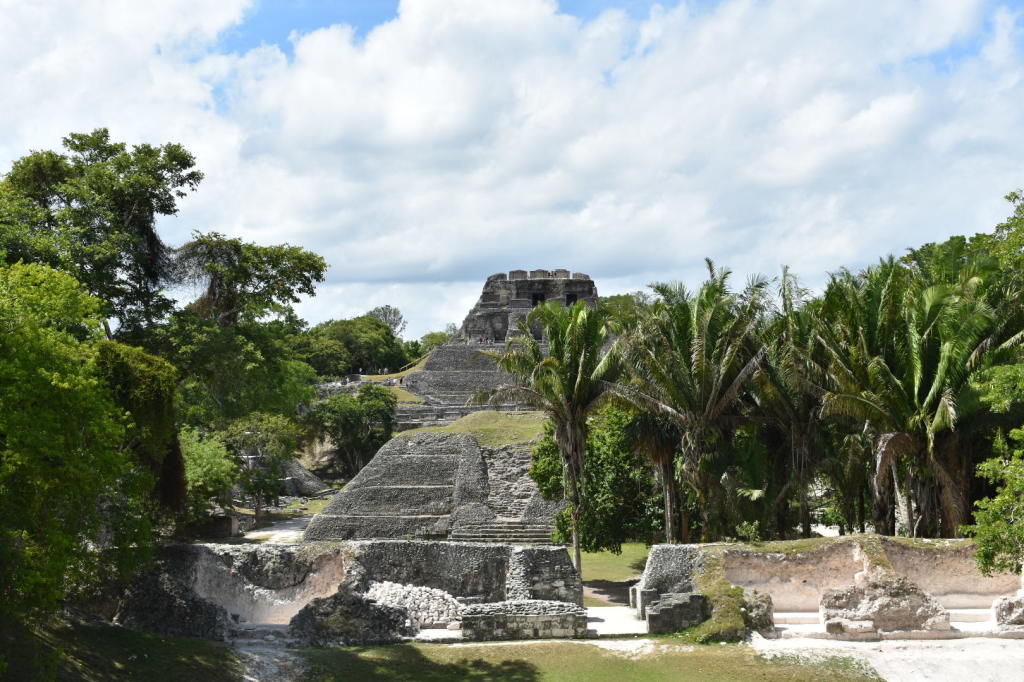